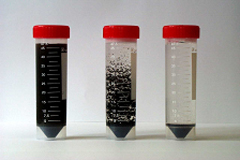 Oily water is generated in many processes in for instance marine-, power- and oil field industries. Oil contaminated water is normally composed of free oil possible to separate by gravimetric settling or centrifugal separation and stable emulsions. Emulsions are often stabilised by mineral particles building up in the interface between the oil droplet surface and water or detergent molecules that prevent the oil droplets to coalesce.

The Lucent range of water treatment chemicals are designed to break up oil emulsions by destabilisation of the emulsion, combined with coagulation and flocculation of the oil droplets.

The picture below show the effect when the two chemical formulations Water Clean 40A and Water Clean 45F have been dosed to highly contaminated oily water. The test tube to the right is the water achieved after decanting over the water phase from the middle test tube. The Water Clean products is working in a wide temperature range i.e., from cold to hot water.

Mechanism of the products

Water Clean 40A is composed of a non-ionic polymer in an alkaline solvent. When dosed to the oily water, the polymer destabilises particle- and/or surfactant stabilised oil droplets by collecting the particles and surfactant material. This will enable a better coalescence of the oil droplets when dosing the Water Clean 45F product. When dosing the product, the pH of the water will rise to a pH of 9.

A schematic picture explaining the performance of the chemicals are presented below. 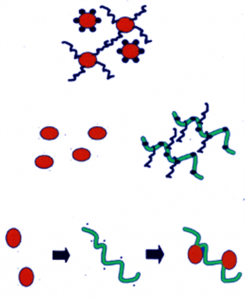 In the top of the picture we see oil droplets sterically hindered by particles and surfactant material i.e., the oil droplets can not coalesce.

When dosing Water Clean 45F the oil droplets are coagulated and flocculated.